You are here:
Find my solution (Self Test)
>>
Schedule an appointment
>>
TestimonialsUncategorized 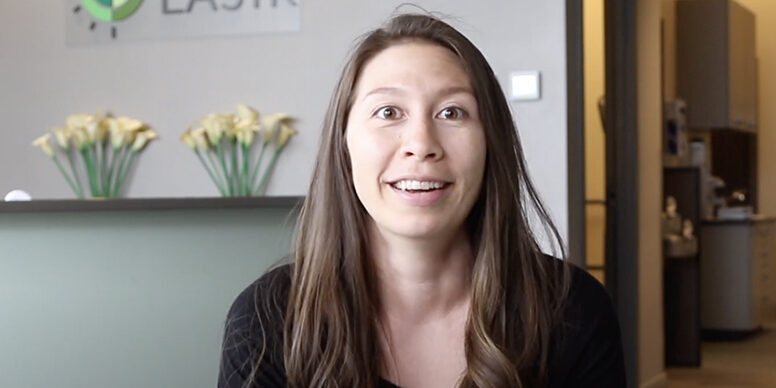 My name is Kristin Masters, I got LASIK surgery at Aurora LASIK here in Lacey Washington. My husband and I have lived in Lacey for the past five years and literally just like two miles away. My husband was the one who really wanted to get his eyes corrected for work, he’s a firefighter. Sleeping in his contacts at night, terrible. So he was browsing places and came across Aurora and everyone here is super friendly and welcoming. Dr. Rudd has a phenomenal record, career so we just decided this is the place we wanted to do it at.

Everyone at Aurora LASIK was super nice, super welcoming, very knowledgeable. They made us feel like it was super excusable to do this procedure. When people think about LASIK they think how much money is that going to cost, it was really simple to go through that process and figure it out with everyone here.

We always tell people, so my husbands a firefights, and they sleep and have to wake up for calls in the middle of the night and if you sleep in your contacts obviously that is a big no no right and nobody wants to wear glasses when you have to put on your bunker gear and stuff. So he would sleep in his contacts and then his eyes would just get trashed. And so now every time someone at the station is like “I really want to get my eyes done” he is like, do it and go to Aurora LASIK and use your HSA. We had an HSA so we were super lucky to be able to do that but, um whatever benefit you have or payment plan, I know that those are options, but do it because it’s 100% worth it!

Ya being able to wear sunglasses, swimming, not having to worry about if you take your glasses off and oh you can’t see your hand in front of you or chlorine or salt water getting in your contacts. So that was a fun one swimming for sure.

You know if you’re into business and stuff like that. You think of ROI and I don’t think you can really quantify how much the return is for how much you spent right. Because it’s a lifetime essentially and we did it when we were still relatively young. Being able to do something without putting something on your face or having to touch your eye balls and put your contacts in. I know Aurora has tons of options to be able to afford LASIK. I think there is just a way to make it happen. Fortunately we were able to do it and blessed enough to be able to do it. Anyone who is thinking to do it I would 100% say look into it because it’s absolutely worth it!